the Spirit of Mahatma Gandhi lives through every nonviolent action

"WHY GANDHI IS RELEVANT EVEN TODAY?"

More than relevant, I would say ‘’today, Gandhi is crucial’’.

Crucial is the time for the world, the whole (human) world needs to change direction.

Human consciousness has expanded and now is aware of things that before could not imagine.

After the fall of communism it seemed that the western way of living was the only way, but now we all realize the western way towards ‘’development’’ is unsustainable, economically, environmentally, humanly.

We all know that way is a wrong way, a dead end way.

The only way out is a U turn, a drastic change of direction, and this is what is happening today.

I live in the western world since I was born, in 1947. I studied in western schools and university, I worked and served within the western way to business and ‘democracy’… In the past I have seen many little changes, ups and downs of the economy, left and right in party politics, but the system was growing and the western style of living kept expanding in the world. GB and the USA were the leaders of what we call ‘’the western way of living’’. Free market for profit, competition winner/looser, party power politics, institutions and related bureaucracy and the ‘majority’ system (50,01%  rules and makes the laws and 49,99 plays opposition), consumerism, fast food and shopping centers, highways and high speed internet, TV serials, reality shows, newsrooms, stock and bonds, credit cards, business, business, business, all with the stress of ‘’growth’’, from GDP (gross domestic product) to family standard of living, consensus and share of market, profit, income, salary, number of clients, viewers, readers, buyers, all must grow, grow, grow.

Now, it is in recession.

No more growth, everything is ‘downsizing’ but a new consciousness is growing.. the awareness that ‘the way’ was not the right way has put the western and the ‘westernized’ world on standby. Crucial decisions have to be made for change of direction, goals, values.

The western world is violent, uses violence and makes shows and movies on violence. In USA there are more guns than people. Fear and greed are the motivations, egoism and individualism are the standards, health and security, pollution, waste and overconsumption of energy are the issues, psychosis, stress and obesity are the most common diseases.

To recede means to retreat, to move the opposite direction, and here Gandhi becomes crucial.

When Mr.Obama made of his slogan.. ‘’change, yes we can!’’  he publicly told a boy that if he had to choose a person of the past to have dinner with, he would choose Gandhi. He said that thanks to the influence Gandhi had on Martin Luther King, the USA could have now an afro-american president.

I do not say Obama is a gandhian… he is a man of the system, but, if change has to be, he knows the direction... Violence can turn to nonviolence, competion can turn to cooperation, greed can turn to sharing, egoism can change into solidarity, the richness of the few can turn to welfare for all, imperialistic 'democracy' can change into swaraj and freedom for all…

India is now, thanks to Gandhi, in the position to lead the world towards a sustainable natural living, fair human relationships, peaceful solutions to all problems and conflicts, healthy farming and healthy food, simple life and integrity… so much Gandhi and Vinoba had to share and now their thought, experiences and achievements are lighthouses for the lost and wondering.

I am sure your intuition knows what I mean.

Replies to This Discussion

Permalink Reply by Riccardo Gramegna on April 26, 2010 at 10:06pm
Dr Bhabani Dikshit, (Email:bdikgreen@gmail.com)
Managing Editor World Focus (the Indocentric Monthly Discussion Journal published uninterruptedly for the last thirty years from Delhi), sent an invitation to write an article for the special issue of his magazine for june 2010.
This is the contribution i have sent.
Even though the dead line for the magazine might be already passed, i thought to use it to start a discussion on this topic. Feel free to add your comments or contribution.

Permalink Reply by Nicolle Theresa-anna Jones on August 7, 2010 at 1:03am
:) thank you!!!!!!!!!!!!!!!!! God Bless you Riccardo! You give me strength and hope through the oppression of as you said, '‘’the western way of living’’. Free market for profit, competition winner/looser, party power politics, institutions and related bureaucracy and the ‘majority’ system (50,01% rules and makes the laws and 49,99 plays opposition), consumerism, fast food and shopping centers, highways and high speed internet, TV serials, reality shows, newsrooms, stock and bonds, credit cards, business, business, business, all with the stress of ‘’growth’’, from GDP (gross domestic product) to family standard of living, consensus and share of market, profit, income, salary, number of clients, viewers, readers, buyers,' and that is all on top of the idividual person's own struggles (such as family and friend relationships). :) i can only dream of how wonderful humanity will be in the future <3 im so glad to have you as a friend Riccardo, i wish good health for you!

Permalink Reply by Kay Salady on October 2, 2010 at 3:17pm
How can I love a man who has gone on before? It is easy. He has set a great example of what life should be, of what honor and freedom mean, of what the simplistic gesture of kindness can do. 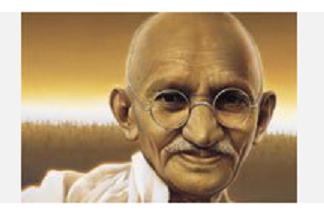 Permalink Reply by Kay Salady on October 2, 2010 at 3:28pm
An example of one man making a difference, one man who did, the father of a nation.
Now, today, more than ever, we need his example in our lives. Welcome to
GANDHI IN ACTION network

My own finding is that first and foremost action in nonviolence (Ahimsa) is the personal aspect of turning to become a vegetarian. It is kind-of easy if not other-intentional to be non violent with…Continue

The statement in Gandhitopia News Digest of Nelson Mandela saying that his hero was not M.K.Gandhi but J.Nehru sounded to me almost as strange as if M.K.Gandhi had said "...my teacher was not…Continue

NOT FROM THE THREE MONKEYS WHO COVER THEIR EYES, EARS AND MOUTH... 1 Reply